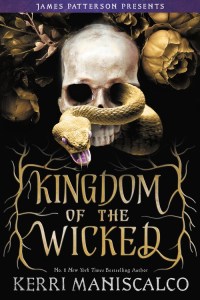 Two sisters.
One brutal murder.
A quest for vengeance that will unleash Hell itself…
And an intoxicating romance.
Emilia and her twin sister Vittoria are streghe – witches who live secretly among humans, avoiding notice and persecution. One night, Vittoria misses dinner service at the family’s renowned Sicilian restaurant. Emilia soon finds the body of her beloved twin…desecrated beyond belief. Devastated, Emilia sets out to find her sister’s killer and to seek vengeance at any cost-even if it means using dark magic that’s been long forbidden.

Then Emilia meets Wrath, one of the Wicked-princes of Hell she has been warned against in tales since she was a child. Wrath claims to be on Emilia’s side, tasked by his master with solving the series of women’s murders on the island. But when it comes to the Wicked, nothing is as it seems…

Did you guys look at the cover?? The skull , the snake and the golden flowers???? Take a good look ! You would wanna remember them.

I requested kingdom of the wicked because I’m a sucker for books with snakes. It was a great surprise finding out Ahana got approved too and we set up a buddy read for this book. Honestly , 2020 has been THE YEAR for my buddy reads. I successfully read like 4 books with my friends and it’s been amazing.

Kingdom of the wicked starts with the twin sister’s childhood memory and that’s how we’re introduced the main cast and the intriguing magic system.

Emelia and Vittoria are the MCs and Vittoria is the one who’s left to solve her sister’s mysterious death and finds out there were more secrets Vittoria’s been keeping.

The book starts out pretty intense but it took on a more fun tone as it goes on.

Wrath , one of the demons in the world building , is summoned and bound to Emelia . Their interactions are downright hilarious.

“Maybe I can’t kill you, but I’ll find other ways to make you suffer.”

“Trust me, your very presence is accomplishing that.”

The world building of the book is in 19th century Italian island , so the local characters play a big part in the book. They’re nosy , gossipy , everything you’ve seen neighbors do.

The writing was good , not exceptional or anything. The plot kept us hooked enough to read . Kingdom of the Wicked carried the vague nostalgia of a 2012 paranormal romance which was bizarre at best.

The plot twists were all guessable in kind of a bad way. There were crumbs all over the book but the reveal was meant to be dramatic , which it wasn’t for me.

I’ve received this book from NetGalley and Hodders books in exchange of my honest review. This has not affected my opinions.

1 thought on “Kingdom of the Wicked Review”